In our series ‘Best Practice: 2 ½ Content Marketing Ideas’, we will regularly be offering tidbits of Content Marketing ideas to whet your appetites for your own campaigns. We will present the content of small, medium and large-sized companies respectively and attempt to explain the intention behind their strategy. In addition to that, we’ll include a quick bonus idea for the road. Our first story begins with a Content Marketing giant: Coca Cola.

Coca-Cola is one of the most well-known and successful companies in the world. In 2012 the company is said to have invested approximately 4.2 billion Euro in advertisement and marketing. With such a huge budget, you can be sure that at least some of it was spent on Content Marketing. After all, Coca-Cola are experts at marketing with content, and few other companies place so much emphasis on this kind of strategy. The company has recently taken to storytelling and replaced its company website with an online magazine journey. There, various authors working directly for Coca-Cola as well as guest authors produce content related to the company, society, lifestyle or entertainment – all from the point of view of Coca-Cola.  In addition to that, the beverage manufacturer has created a clean-cut brand image for itself by means of smaller events and promotions.

Coca-Cola’s current marketing campaign is best characterized by the catchword “happiness”. The soft-drink producer is focusing its entire communication on conveying a sense of wellbeing to the customers. To that end, the website is updated with articles from experts on various topics, including health, nutrition and sport, reports from people on the road to finding happiness, or ideas on how to create and share happiness.

Their “Drink a Coke with..” campaign has the soft  drink company printing various names or terms for people on the bottles, which can be given to others as gifts or are simply bought for oneself.  The concept behind it is simple, however: The printed bottles are meant to make people happy. Alongside this promotion, recently Coca-Cola vending machines the world over dispensed free drinks to customers, although only to genuine couples. The pair just needed to give one another a kiss as evidence and the machine gave them two free soft drinks. Other beverage donors provided additional gifts alongside what was given by Coca-Cola. The latest promotion carried out by the company was the beautification of a drab area of concrete jungle, which was accomplished by laying out turf and setting up trees with small presents inside. The public was then invited to make itself comfortable on the new meadow. It goes without saying that they also placed Coca-Cola vending machines around the area. By removing their shoes in front of the machine, customers could receive a free beverage.

Each campaign is skilfully promoted, and videos, photos and articles are published on the site. Coca-Cola hopes to use their brand reach out to as many people as possible; at the same time, however, they also produce a wealth of helpful and interesting content.

What you can learn from them

Coca-Cola’s aim with these campaigns is to inspire good feelings. The idea is to tie the thought that ‘Coca-Cola brings joy to life’ firmly with the company image itself.

Think about ways to spoil your customers, even if it doesn’t have a direct impact on your sales. Your customers should associate your brand with positive emotions – this is best done with emotional, ‘feel good’ campaigns. Why not set up an attractive and highly creative event for your customers? The whole thing will be captured on video and in photos and can later be published on your blog. This creates a win-win situation for you and your company: Your customers are happy, you get to be the ‘bringer of joy’ and you have good content to boot. 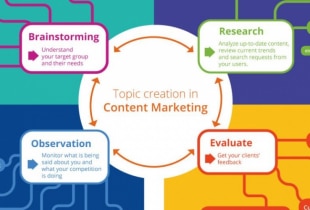