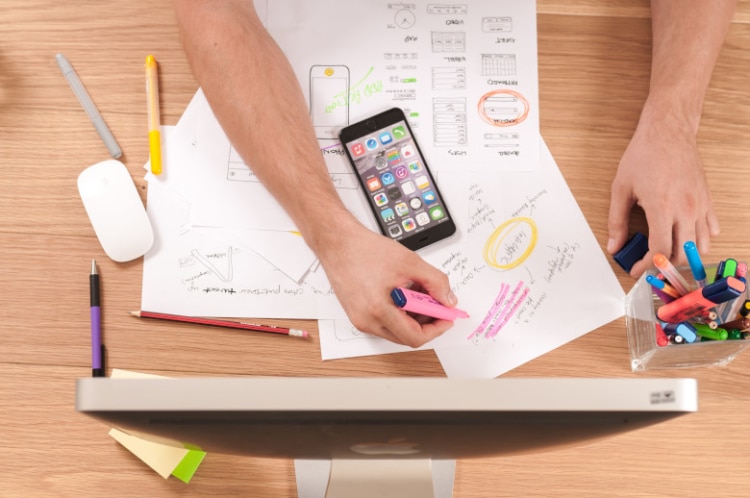 WDF*IDF is a formula that can be used to determine the optimal distribution of topic-relevant terms or keywords in a text. However, the procedure for determining this distribution is much more complex than dealing with keyword density, the simple frequency distribution of keywords. WDF*IDF-optimised texts should comprehensively present a topic. Unlike conventional keyword counters, WDF*IDF tools also evaluate the semantic context in which keywords are used for this purpose and suggest thematically relevant terms.

The WDF*IDF formula has been an important topic in OnPage search engine optimisation since 2012. Originally, the formula – which describes the optimal distribution of topic-relevant terms in a text – comes from information retrieval. The information scientist Donna Harman mentioned this formula as early as 1992. In the SEO sphere, the formula was introduced by the online marketer and SEO expert Karl Kratz. The formula relates two factors for analysing texts, WDF and IDF.

Instead of keyword density, WDF*IDF-optimised texts are referred to as term weighting. The reason is that strictly speaking – when the WDF*IDF formula is applied – the keywords are no longer called keywords, but terms.

The topic of WDF*IDF became particularly controversial because Karl Kratz aggressively promotes this model as a replacement for keyword density. Based on some vector calculations, together with the mathematician Jana Engelmann, he deduced that keyword density is actually worthless for information retrieval or search engine optimisation.

Put simply, the reasoning behind the WDF*IDF formula is as follows: The more often a word appears in documents that are rated by search engines as particularly relevant for a certain search term, the more relevant this word is for the search term. Based on this principle, the WDF*IDF analysis determines the thematic relevance of supplementary keywords for a search term.

Common WDF*IDF tools evaluate the term weighting of those pages that rank best for the main keyword searched for. Based on this analysis, the tools suggest corresponding proof keywords. These thematically appropriate, supplementary keywords should appear in a text next to the actual search term. In this way, a WDF*IDF-optimised text should achieve a term weighting that is oriented towards the documents that rank best for the respective search term. If this optimal term weighting is adhered to when writing a text, it will likely appear relevant to search engines and have a good ranking potential.

Karl Kratz describes the functioning of the WDF*IDF formula in great detail on his website.

Once the main keyword for which a text is to be optimised has been defined, a WDF*IDF analysis can be carried out with the help of various SEO tools. Various providers such as Ryte, Searchmetrics or seobility provide appropriate tools. With these tools, the text of a document can be optimised according to the WDF*IDF formula for optimal term weighting. They all work in a similar way:

The user tells the tool the keyword for which he wants to optimise his text. Then they select the country for which the text is to be optimised. Based on this setting, the WDF*IDF tool recognises whether websites from Germany, Switzerland or Austria should be used as a reference. Subsequently, the tools determine the terms relevant for the search term as well as the term weighting based on the analysed pages. For this purpose, the tools examine the best ranking pages for the specified search term. They then display the relevant terms and their frequency distribution in a detailed overview. For each of the terms, the tool determines the ideal WDF value. The user can now compare their own text with the determined WDF values and, if necessary, improve it to get closer to the suggested ideal term weighting.

Various tools can help to optimise the text of a document according to the WDF*IDF formula for optimal term weighting.

The most important providers of WDF*IDF-capable SEO tools include:

Search engine optimisation – according to the WDF*IDF formula – has been one of the big trends on the SEO scene since 2012. More and more providers of SEO tools enable WDF*IDF analyses with their software. So far, the main interest in this idea has been in German-speaking countries. However, it is conceivable that this form of text optimisation will also gain importance in other countries in the future. Although efficient search engine optimisation is very important for web texts, the quality of the content should always be in the foreground for website operators.

Google always emphasises that texts are written for the user and should offer them added value. After all, Google strives to show users relevant search hits. Thus, WDF*IDF optimisation is a valuable tool to further enhance well-written and user-relevant texts for even better ranking potential.

As part of our managed service, Textbroker UK offers texts that have been optimised according to the WDF*IDF formula.

Join over 80,000 customers world-wide, and use Textbroker for your Content Marketing.
Register now for free
« Back to Glossary
Next Article » White Paper